Beth Orton: ‘I started to believe I had run my course’

Sugaring Season is Beth Orton’s first album in six years – a time in which she thought of giving up music. But after having two children, some therapy, and guitar lessons from folk great Bert Jansch, the Brit winner is back 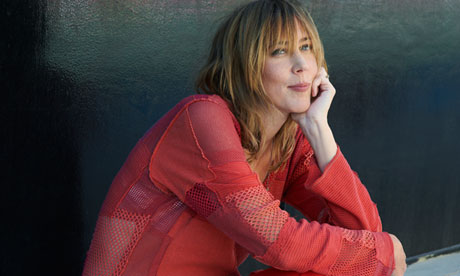 Beth Orton: ‘Being a single parent was quite a shock on every level.’ Photograph: Suki Dhanda for the Observer

It is six years since Beth Orton released a record. In that time she has had a daughter and a son, lived as a single mother in a converted cow barn in Norfolk, been let go by her record label, turned 40, got married, doubted that she would ever make music again, contemplated going to university or writing a novel, fallen in and out of love with her guitar, been occasionally despairing and, at the end of it all, surprised to find herself “really brim full of life”. Her new album is called Sugaring Season, the title a reference to the time of year when maple trees are tapped for syrup. “It takes a lot of sap to make a little bit of syrup,” she explains. “But what makes the flow are these long, cold nights alternating with those ever so slightly warmer days – beauty and melancholy mixed together – and after that, that’s when the sweetness comes.” The title is well-chosen for a collection of songs that carry all of Orton’s fragile clarity of voice and emotion but no little sense of hard-won experience.

The beguiling innocence and trippy introspection of her early career – it’s a dozen years since she won a Brit award as best female artist for her innovative adventures in folk traditions and dance music – has given way to something both more considered and perhaps more liberated. Nearly two decades after she was “discovered” at a party by Madonna’s then producer William Orbit, it feels, she says, sitting on the floor of a chintzy hotel room in Covent Garden, a bit like she is starting everything from scratch. “The thing was,” she suggests, “as soon as I started making music, it got released. And after that I was always felt one step behind it all. I never had a minute to breathe and at the same time I was always scared of stopping. So having this time off has been kind of necessary and amazing.”

Orton is a likably vague, suddenly animated presence, spiriting quickly between moods, much like her music. It’s tempting to listen to Sugaring Season as a postnatal album, or at least one in thrall to what Orton calls the “close proximity of heaven and hell” in parenting – “One minute it’s ‘Oh my God, this is so beautiful!’, and the next it is ‘Oh my God, just go to sleep!'” Looking back, she says, the real genesis of the record coincided with the birth of her daughter, Nancy, now six, and some of the songs directly celebrate their raw and all-consuming mother and daughter intimacy. See Through Blue”, a playful would-be lullaby, in particular looks forward to “this beautiful life we’ll build by hand, from scraps and shards and broken strands”. It’s quite a long way from the sharper-edged sense of longing and loss that characterised her love songs.

“Nancy was a big ending and a big beginning for me,” Orton says. “I think when you have a child, it takes you a while to realise how selfish, how self-involved you have always been, then gradually it does unpick you and there comes a point where you sort of stop fighting for your own corner, and give into it. It melts away any artifice. Well for me it did, anyway. I was a single parent. And it was quite a shock on every level…”

The song to her daughter is derived from those dislocating hours of sleeplessness – “the hours when spiders mend their webs” she calls them. It also seems to speak, I suggest, of snatched moments of creativity, and the strangely freeing delirium of tiredness.

She came up with that particular line, she says, one night when her daughter finally fell back to sleep and she was totally wide awake. “I looked on the back porch and there was this spider working away at its web, fixing it. I knew that I should go to bed myself, mend my own webs, but I found it was irresistible to go up to my room and pick up my guitar. It was illicit. And I knew I would pay for it the next day when Nancy would be up about five. But I found that I could make connections that I maybe wouldn’t normally make.”

Songwriting has always been a process, she suggests, of letting her unconscious mind lead her to unexpected places. The extreme fatigue of early motherhood seemed to help that process sometimes. “It was a sort of high,” she says. “And I guess that is why a lot of people do drugs, in order to fray familiar associations.”

In the past, Orton found different ways of getting to that songwriting place. When I ask how her methods have changed for this album she suggests that the other truism of motherhood she now recognises is that it is impossible to remember properly life before children. “I honestly have no idea how I used to do it,” she says. “Apart from specific songs.” Central Reservation, she recalls with a smile, the title track of her breakthrough 1999 album, “was written in Cartagena in Colombia after a different kind of night with no sleep. I had been doing what you do in Cartagena with some beautiful boy and snorting a stupid amount of coke and the song came from the joy of sitting in the sunshine the next day with a glorious hangover. I do remember that…”

The before and after sense of the current album extends also to Orton’s guitar, she believes. She has always been an instinctive player; she doesn’t read music, and sometimes felt ashamed of that fact. Soon after she had Nancy her contract with EMI was terminated. “I think most people in the industry thought I had run my course,” she says. “And I started to believe that too, I think. I was like ‘Er, OK, goodbye, I’ll be off now, I’ll just be over here if you need me again ever.’ I was sort of relieved to be let go. I knew they weren’t in love with me, so it felt all right.” She wasn’t sure she even wanted to make any more music, anyway. It was at this point she thought of going to university, writing a novel. Instead, she relearned to play the guitar.

The mesmerising guitarist Bert Jansch had been a hero of Orton’s for as long as she could play. In 2004 they happened to do a gig together and share a dressing room and Jansch’s wife, Lauren, invited her round for lunch. When she got there, Orton found herself asking Jansch for guitar lessons. They were quite formal to start with. “I would try to keep up with him while he played, and he would show me certain tunings, and later we did some gigs together. I was pretty much every week around their house. It was always nerve-racking and a constant reminder of my limitations as a guitar player. But wonderful too, and I felt I had to be there in a way.”

The longer she played with Jansch, the more her confidence grew. “My picking style changed,” she says, and with that came a new sense of possibility. “I used to think it was good to kind of work within your limitations. Then I started to think: fuck my limitations. I was playing on my own anyway, no one had to hear what I was doing.”

By this time Orton had taken herself out of London and to a house up a dirt road near Diss in Norfolk, just her and Nancy. It was a homecoming, of sorts – she had grown up not far away, in Dereham. There was also a sense of closing emotional circles. She had left the flat country of her childhood when her parents had split up when she was 11 and she subsequently moved to Dalston in London with her mother. She knew a lot of tragedy in her teens. Her father died soon after he had left the family home, and her mother also died young, when Orton was 19. Thereafter she had a love-hate relationship with solitude. Immediately after her mother died, she took herself off to a Buddhist retreat in Thailand and lived as a nun for several months. She had always prized her self-reliance, she says: “I always remember once when I was a very little girl, with my mum and dad. We were driving through these endless flat fields and I was thinking all the time: what if I was out in that field on my own? The frightening and thrilling feeling of that stayed with me. I sometimes wonder if that was the beginning of the pull to escape that I felt.” She cured herself of it in Diss. It was wonderful in a way, being on her own with her daughter, writing songs, she says, but it also brought home to her the understanding that isolation is also a form of depression.

Collaboration brought her properly back to life. First with Jansch – “who then went and bloody died”, from cancer, last year; then with Tom Rowlands of the Chemical Brothers, who helped Orton to re-engage with her music by introducing her to the possibilities of layering her own voice on GarageBand and Logicprograms software; and finally with Sam Amidon, the American folk singer who became her husband (and father to her son) last year. “Sam was really helpful in getting me to let go of songs I had written,” she says. “Or to finish the ones I hadn’t. I met him when Nancy was two and we were friends for nine months. We would have dinners, not dates. One day we were out on Hampstead Heath and he had his banjo and I had my guitar and there was this double rainbow. Then we went for months hardly seeing each other. Eventually he kissed me and now he is my husband and we have a child and it is amazing!”

There was a time, Orton suggests, when talking about any of this in an interview would have been difficult for her. But the sense of self-sufficiency and wilful isolation has given way to a new kind of openness, which she seems to cherish. “I have had some therapy too,” she says. “And this can be a similar process. At least, maybe I am not so scared of sitting and talking to another human being about myself as I used to be.” It’s a bit similar with the songs, she suggests. “There is much less, you know, ‘this is how I feel and I am just going to fucking say it and you better listen’ about them.”

They sound grown-up, I suggest. And then, seeing her flinch just a little at that particular idea, add “in a good way”, at which she smiles like a child.

One thought on “Beth Orton: ‘I started to believe I had run my course’”